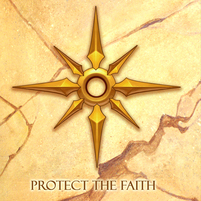 Name: The Iron Solari
Ideals: The Iron Solari is the modern adaptation of an ancient and mystical religion that took root during the dawn of time, back before chakra was introduced to mortals and before the war on the heavens. The Solari, the mother religion, was founded to worship the great goddess Solinia, to praise her, lift her name up and spread her values through out the land. She taught unity, compassion, love, peace and the value of diligence. During the great wars, the religion fell into darkness, overshadowed by humanities hatred for the gods. When the world changed and the hidden villages sprang back up, those who had settled in the desert revived the old religion, hoping to appease a god who had turned her back on the people. They believed that while Solinia still loved them, she could no longer be with them due to their betrayal, and that is was now on them to take up that mantle. The Solari became known as The Iron Solari, a group dedicated to teaching Solinia's values while assuming her role as mother, as guardian and as protector. The Iron Solari now stand up for whats right and just, defending the weak, the poor, and those who seek shelter from the mother they no longer have access to.
Location: Nikkousato | Sun Village
Requirements: (Currently Closed)
Member List:
-
-
-
Armory:

A standard issue shield given to each member of the Iron Solari, and a symbol for what they believe in. It is a large steel shield double layered in the front. The edges are equipped with spikes, with a pointed edge at the bottom. The shield is colored orange, red and violet, to mimic the different stages of the sun. Atop the shield is a ring with spikes spoking the inside of the ring, this allows a peep hole for those behind it while still be relatively protected.
Function: It does what most other shields do, it protects. The shield can be strapped to the users forearm on the inside, and has enough hand holds to keep the shield sturdy. It is considered heavy gear, assuming the properties of that gear type. The shield is large enough to protect the person standing behind the shield. However, for an action, the owner can trigger a switch on the inside, which will cause the edges to pop out like wings. This increases the size of the shield, allowing it to protect multiple people who might be standing behind it. However while the wings are out, the wielder can only move 3 meters per post, regardless of any perks.

Abilities:
Due to being a legendary item, this item has a seal on it which allows it to be summoned back to the owners hand. If the shield is no longer on the owners person, for an action, it can be summoned back almost as if it was a fuinjutsu ability. This item will not fly through the air or move on its own, but simply will reappear in its owners hand. This can only be done if the shield was on the user at the start of the topic.

The inside of the shield is equipped with a second seal, etched where the hand hold is. If the user places their palm against this seal, they can pour chakra into it and activate its ability. They must pay 20 chakra to do this and can only do it twice per topic. Once the seal is activated, a blinding flash will illuminate from the shield, flashing anyone who is 10 meters in front of the shield. Anyone behind it is completely protected from the flash. If you are looking at the shield or are able to see the flash, you will be blinded for two post, meaning your vision will be filled with nothing but white blinding light. All of your other senses will work, but you will be unable to see for the next 2 post.