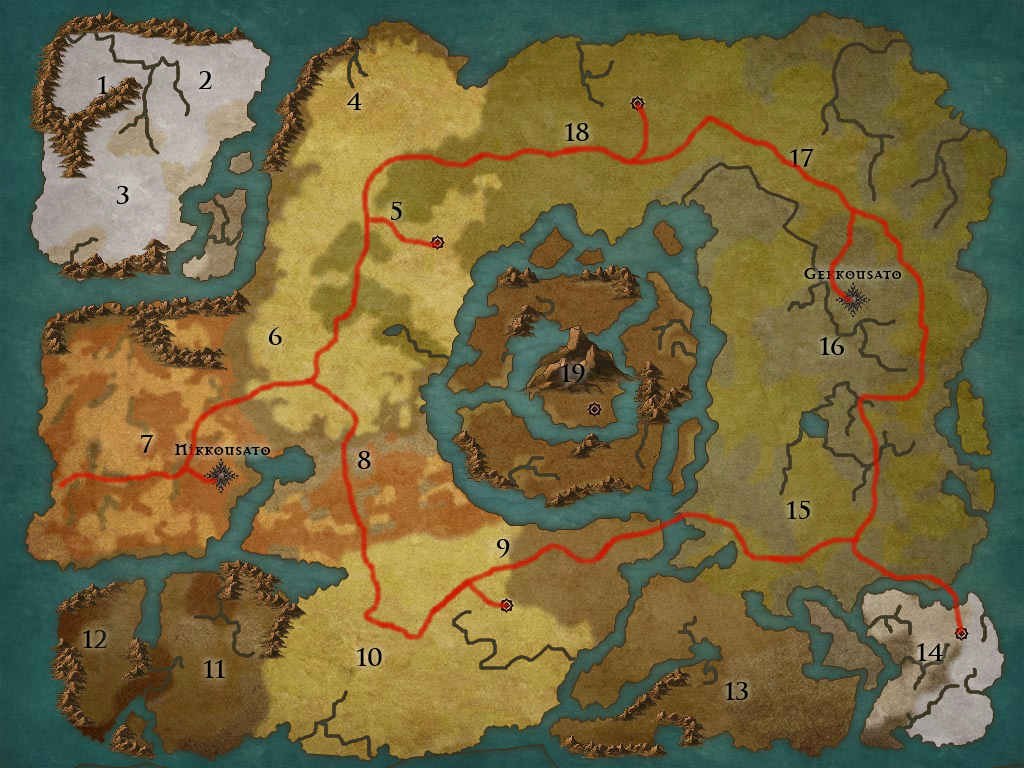 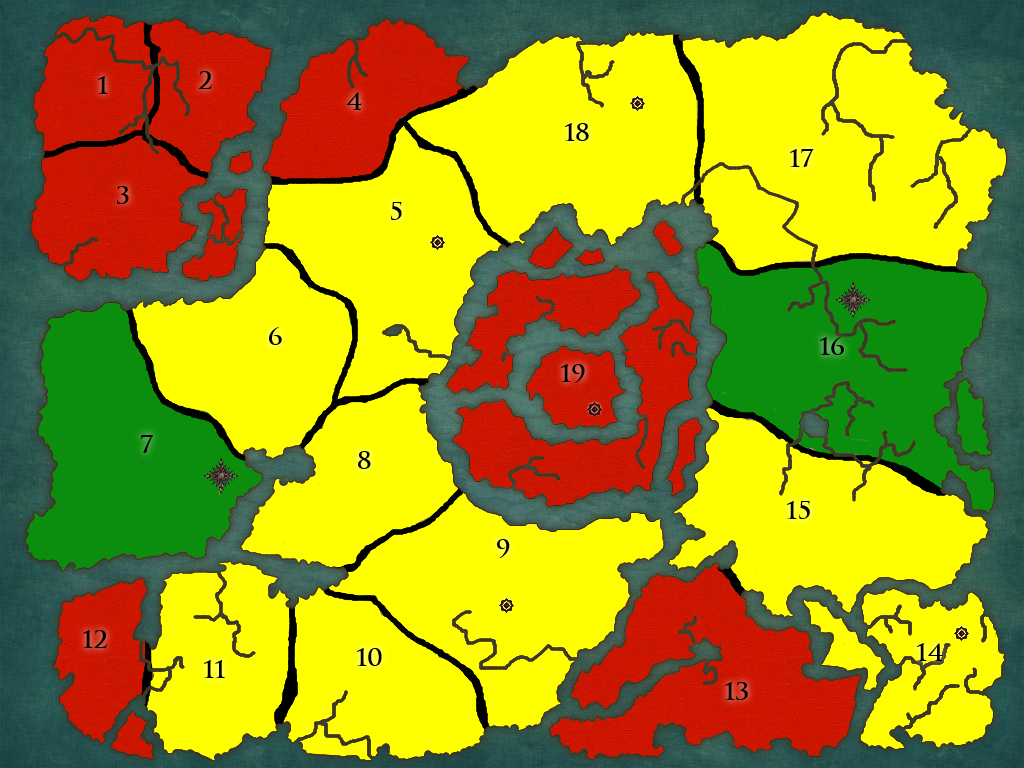 Spine of the World
A massive mountain range outlining a barren and icy tundra. This region is home to the tallest mountains in the world, and also the most dangerous. With thousands of caverns and caves to hide in, it is a popular spot for wanted criminals to escape to and hide out in. The Tundra is home to some of the scariest and most dangerous creatures in the world. (Region 1) (High Danger Zone)

The Infinite Expanse
Expanding across most of the island is a massive ice field and tundra that expands as far as the eye can see, seemingly going on forever. Covered in nothing but ice and snow the Expanse is unforgiving and unrelenting, with blizzards and ice storms a common occurrence. (Regions 2,3)(High Danger Zone)

Titan's Island
A rocky barren island off the east coast of the region, fixated between two land masses. Due to the harsh nature of this island, it has not been explored very much, with many rumors and stories talking about this island. Blizzards and lightning storms frequent this island, making getting to it just as dangerous as the island itself. (Region 3)(High Danger Zone)

The Frozen Forest
A dense forest located in the south. Sitting at the base of a mountain range, the forest is home to several unique types of animal, and is known to house criminals and others who are trying to remain hidden. With little to no civilization within the forest, getting through it can be confusing, and very dangerous. (Region 3)(High Danger Zone)

Kellen Plains
Positioned in the uppermost part of the world, the Kellen Plains sits across the river from the Tundra of the north, and has its own place at the base of a jagged set of mountains. The plains is nothing but a wide expanse of fields and grass, with an occasional tree dotting the landscape. It begins to get warmer here as you head south, causing bandits and thugs to roam the open area, hunting and ambushing travelers. (Region 4)(High Danger Zone)

Debon Plains
A continuation of the plains from the north, this expanse of field continues south covering this part of the region. To the east is a set of wooded areas that slowly move across the land, that eventually turn into dense forest. This region is home to several merchants and travelers, with outpost sitting along side its road. The Debon Plains are home to the Village of Debon. (Region 5)(Medium Danger Zone)

The Dry Lands
Where the plains meet desert, a dry environment with little vegetation. However it is not void of life, as many people use this region to travel between the north and south. It connects the Sun Scorched Desert to the rest of the world, and many merchants post up here in attempts to sell to the shinobi leaving the area. (Region 6)(Medium Danger Zone)

Sun Scorched Desert
A massive desert located on the western most side of the continent. Its a dry and hot environment, but while it is dangerous life still manages to prosper. The village of Nikkousato calls this region home and has claimed the entire region for itself. The desert itself is vast and spreads out into a mountain range to the north. The country is quickly growing as the Sun village spreads across the region. (Region 7)(Low Danger Zone)

The Waste
The Waste is an expanse of sand and desert that moves south connecting the world to the north. Its a very dry and hot environment with little civilization. Many people move through the region as fast as they can, as its not that large, and very harsh to spend an elongated amount of time in. (Region 8 )(Medium Danger Zone)

Blending Fields
A dry and rugged part of the world, it is bleak and barren with little vegitation or even grass. It is a blend of dry plains and open fields with rocky out crops and plateaus. While a harsh environment people do still call it home, with the village of Aryn located here in the fields. (Region 9)(Medium Danger Zone)

The Barrens
The barrens is just that, barren. All roads end here, as there is just nothing out here, or atleast nothing that anyone is aware of. The landscape is littered with ruins of ancient cultures from a time past. Those who spend time out here claim to be treasure hunters, looking for relics of the world before. (Region 10)(Medium Danger Zone)

Warriors Pit
On the lowest part of the western world sits the Warriors pit, a wild peninsula that juts out into the sea. This area is very rocky, full of mountains and filled with harsh weather. It derives its name from the countless lives that have been lost here, as this was once home to a massive war. It is now used by shinobi who wish to prove themselves. Villages have been keeping their eyes on this area as it is a strategic part of the world. (Region 11)(Medium Danger Zone)

The Brink
A continuation of the western peninsula, many believe The Brink sits at the edge of the world. Its a harsh, hazarderous environment rife with bad weather and savage outlaws. Those who are brave enough to venture to this part of the world will find themselves among terrible creatures and dangerous criminals, as this bit of land seems to be popular among those fleeing the world. (Region 12)(High Danger Zone)

High Spire
A mountainous and rocky out cropping that juts out into the sea. Nestled off on its own, the High spire region is not known for much, with very few braving its landscape. A large inlet branches inland from the sea, and many sailors use this area for fishing as it is home to unique creatures only found in these cold waters. (Region 13)(High Danger Zone)

Frostlands
An icy island in the south, peppered by mist and storm. Its a harsh area, but life still holds on, as many call this place home. Its a popular fishing island, and home to many brave stalwart individuals. It tries to ignore the political environment of the rest of the world, seperated by much of the population of the rest of the world. It is home to the fishing village of Craiglorn. (Region 14)(Medium Danger Level)

The Lower Marsh
South of the Lunar Light jungle sits the lower marsh, a swampland that covers most of the southern region. A thick bog filled with wetlands, venomous creatures and deadly plant life, it acts as a natural defense to anyone trying to move north. (Region 15)(Medium Danger Zone)

Moonlit Grove
The Moonlit Grove is a vast expanse of woodland and lush jungle. It is filled with vibrant plant life and dangerous creatures who call these jungles home. Wild beast are not the only ones living in the grove, as Gekkousato reigns over the region, nestled deep in the massive network of jungle. Its a beautiful and fantastical region that is quickly being dominated by the Moon village. (Region 16)(Low Danger Zone)

Cindervine Jungle
One of the largest regions in the world, settled in the north east, the Cindervine Jungle is a large dense jungle with little civilization. The jungle spans the entire region and connects the west to the east. Its a very humid and tropical environment with lush fauna and violent volcanoes. Snaking rivers wind their way south, creating a very lush and beautiful part of the world. (Region 17)(Medium Danger Zone)

The Baulder Woodlands
A serene forest that spreads across the north, with most of the land being woodland. Many call these wood home, living out in the wild, creating farms and living with families. While not one large connected forest, it is several spotted forest that seemingly connect together. This region is home to the heavily populated forest village known as Baulder. (Region 18)(Medium Danger Zone)

Crater of Death
The center most part of the main continent, a massive collection of islands and volcanoes. It is a dangerous and violent region home to dangerous creatures, renegade criminals and harsh environments. The main island holds the remains of the massive creature that once ravaged the world, and is now just a bleak and barren waste land surrounded by violent and turbulent waters. (Region 19)(High Danger Zone)

Kataki Road
The major road way that connects the nations together. A network of paths and roads that weave through each nation, and is patrolled by shinobi, guards or even bandits. (Medium Danger Zone)

The Wilderness
Open countryside, dense jungle and vast expanse, anyone looking to travel across the country and avoiding major road ways often take to the wilds. While easy to hide and away from peering eyes, the wilderness is dangerous, filled with vile creatures and blood thirsty rouges. (High Danger Zone)

Open Ocean
Streams, rivers and ocean, perfect for traveling when you want to be alone. However the sea is unforgiving, and getting caught out in open waters without proper resources can spell disaster. (High Danger Zone)
Current date/time is Thu Jun 24, 2021 5:16 pm