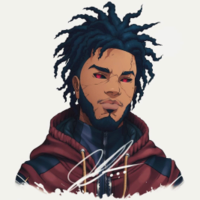 Name: Scout the Border
Rank: C-Rank
Participants: Moon Village, Sun Village
Type: Solo Mission
Reward: 20 EXP
Details: Just like patrolling the village is important, it is also important to make sure the nations borders are secure. Your task is to spend time roaming the regions borders and making sure nothing looks out of place. This includes roaming the main road, outing bandit camps or arresting thieves. While it can be boring at times, you never know what is going to pop up out in the wild.
Requirements: Your post must be at least 600 words.

Judar was lying in his bed when his alarm started to go off, BEEP BEEP it ranged like thunder. Judar open his eyes lids having black rings at the bottom, the sun light beaming from his window caused his eyes to be sore as he began to lift his head to be sitting up. "Fuck I really don't want to get up" he thought to him self as he lifted his left brown hand of his mouth to give a  loud yawn. He pushed his legs over his bed so his feet could touch the floor, then proceed to stand and began streaching only wearing  a par of boxes. Soon after he made his way to his dresser and reached for a rolled cigar. He lifted to cigar to his lips and lite it a pack of matches sitting next to it and sat back down on his bed and began smoking. He began to think about how his day was going to remebering the mission he was given to day he was going to scout the borders. He was told about  a group of bandits hiding near the borders of the village , it was rumored that they have been robbing travelers who was coming in and out the village.

15 mintues later Jin would had finished smoking his cigar. He would then make his way to his closet so he could dress. His hand would reach for a coal black t shirt and dark sea water jeans. He put his jeans on one pant leg at a time then thrown on his tee shirt. Soon after he reached for his flat jacket to place that on soon after he attached his holsters to his right leg and his pouch on the back left side of his waist.  He twisted one of his mess dreads then proceed to places his head band on his forehead and tied it tightly in a knot as he stood in front of his mirror look at him self. Then he made the exit from studio apartment.

Walking down the streets of his village he began to head towards the ramen shop until something caught it. It was a round plump butt of a woman bending over picking up papers that she had dropped. Jin was over there with lustful intentions standing a few feet behide her just admiring the shape. She took a full standing posture and turned to be greeted by Jin " what's sup peaches "he flirted. But the woman ingroed him and walked off. This didn't bother Jin at all there was other women to out there he could shoot his shoot with. He then had arrived at the ramen shop. He looked the clerk in the eye and smiled " Ramen " he said throwing the amount of the cost of the ramen and also a drink " i want sake too and not that weak shit'. The man gave Jin a nod and handed him his order. Jin soon finished his meal and head towards the gates of the city as he showed the guards his pass and proceed to start his mission.

Jin walked for about three miles out side of the village. Sweat ran down his cheeks, his right tan would wipe it off. It was a very hot day, and Jin dreaded having to go out side. A few meters in front of his he seen a man looking very suspect to him, so Jin choose to tail the man. The man would stop at a near by road where about three more men stood armed with axes, and swords. The group of men stopped a traveling woman " Hey bitch stop right there" one of them said placing his sword outward towards the woman. " Gives us every thing you cunt" a another on screamed. The woman  frighten would comply by handing over a bag that she had been carrying at this time Jin hand taken action after a few hands seals Jin had taken action flicking in bewteen the woman and the second man , thrusting his hand through the man's chest as the sounds of birds chirping could be heard. Blood dripped from the mans chest running down form a puddle the man eyes closed. Jin looked at the first man with a killer intent with his red one tomoe eyes. " Look it's hot and I don't have time for weaklings, in fact I rather not waste my chakra on you drop your weapons and I wont kill you all where you stand. The first had the woman back her bag and they all dropped their weapons as they was not match for a ninja. Jin arrested all three remaining men and took them off to jail completing his mission.