Round Up [Solo Mission] 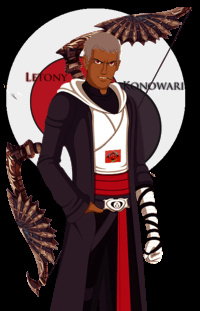 Round Up [Solo Mission]

Spoiler:
Name: Bell Around the Monkey
Rank: C-Rank
Participants: All
Type: Solo Mission
Reward: 20 EXP
Location: Anywhere
Details: Chakra Monkeys have always been a pest around the local populace. While they pose no life-threatening danger, they do disrupt the lives of farmers and travelers. They are small curious monkeys which over time have learned the crude manipulation of chakra. They have been known to steal fruit, overcrowd water sources and throw chakra-enhanced rocks to any that disturb them. The mission is simple: find as many chakra monkeys as you can and tie around their necks a special bell necklace. The bells will violently shake when the monkeys channel chakra to alert any who are near them. Do not kill the monkeys as untainted wildlife are endangered.
Requirements: Your post must be at least 600 words. Tag at least 10 Chakra Monkeys.

Having obtained ten special bell necklaces from the Administration Building upon retrieving his mission, Letony took to Nikkousato’s shinobi training fields to round up a few loose monkeys who were interfering with the Academy’s lessons. Upon approach it appeared all the students and staff had already cleared the area, as to not interfere with Letony’s tagging of the animals. He approached a rectangular plot of stone, the monkeys all scattered throughout it. Letony made sure to be meticulous with his movements, so as to not startle the small creatures. He also didn’t want to raddle the bells and disrupt his own element of surprise upon his arrival. His light golden-brown eyes narrowed at the throng of monkeys before him, there were at least ten. ‘How should I deal with these little pests,’ he thought, ‘if I capture them in my type of Genjutsu... it could cause the opposite of what I intend. But I do have something that will work.’ The man exhaled a quiet breath into the warm air of the craterous villages training field, as the sun blazed from above. The boy performed a single hand seal then proceeded to remove his sheathed Katana. He tapped it against the edge of the rectangular stone field, where all the monkeys seemed to be preoccupied with their various games, and play. This motion startled them to gaze in his direction. Letony viewed as some went for rocks, apparently some of them wanted to hurl them at him. Two bad monkeys to be exact.

Letony’s plot was already at hand however as he directed his fingers at the two monkeys’ as they aimed at him to throw. Their hands would suddenly halt, losing all feeling of touch in their hands, and were now suddenly incapable of holding the stones. The rocks cascaded toward the ground as Letony dashed forward towards the two bad monkeys. They were so confused as to why their hands had no feeling, they remained stationary as Letony removed two bell tags and quickly assembled them around the two monkeys, tagging them. The other monkeys would quickly scatter, and Letony created hand seals, “Konowari Razor Massacre Formation.” The man said forming a barrier around himself to thwart their escape. Seeing that they were trapped they turned to focus on Letony now. But the boy was already busy heading toward them brandishing the sheathed Katana, and solidly striking multiple monkeys, effectively disabling them enough to tag them. He would take out another five monkeys with this maneuver then tag them in kind. That left three monkeys left. He would be staring them down, as they all thronged together, the only three remaining to be tagged that could still use chakra. “Don’t make this harder than it has to be. You bastards,” he dashed forward horizontally striking with the sheathed katana at a low elevation to smack two monkeys across the head knocking them back a about a foot with enough force to nullify their actions for now. With one remaining, he brought the katana around from his horizontal slash and spun to generate another strike, debilitating the last monkey. He quickly tied his katana along his side once more, then went to inspect the downed monkeys he’d yet to tag. He quickly wrapped the bells around each one of them. Securing the bells which would restrict the monkey’s ability to disturb the students, and classes participating in the training field. Not to mention any tourist spectators, or persons seeking out shinobi for escort missions or other tasks. In total Letony tagged all ten monkeys, and thus his mission complete. He would head back to Administration Building to report his success.