The Trials of the Midnight Champion (Solo Clash) 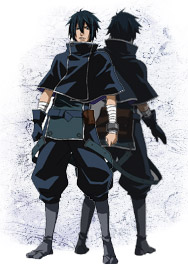 The Trials of the Midnight Champion (Solo Clash)

Mission Info:
Name: Battle for the package (Solo)
Rank: -
Participants:  Moon Village, Sun Village, Missing Ninja
Type: Solo Clash
Reward: 30 Exp to the winner 10 Exp to the loser.
Details: This clash is over a very important set of documents or a package. One individual is in possession of an item, such as an envelope, box, bag or some other kind of object. Their objective is to protect the item before its owner or back up arrives. The other participants goal is to steal or destroy the item. They can either knock out their opponent, take it off of their opponent, or destroy the item. If they are unable to take the item before the time limit is over, back up will arrive for their enemy and the clash will end.
Requirements: The parameters of the item must be detailed in the first post by the defender. The defender has 30 post to defend the item, if they knock out the enemy or get to 30 post, they win. The attacker must knock out the defender or destroy what they are defending within 30 post.

The long storied history of Gekkousato had seen many a champion and valiant warrior hail from this village. Its martial history legendary and unique. The great Kaguya clan even chose to call this land home because of the proclivity for martial masters to live and teach here. The very island that would be the focus of the day was established because of one such champion of old. All forms of martial arts from Shurikenjutsu to Taijutsu were practiced, honed and mastered here. Dozens of schools dotted the landscape of the island and its many arenas and training grounds. It was the pride of the village and a testament to their skill and place in the world.

Today two ninja of the Moon had been summoned to the Island to take place in a sacred right that happened on the eve of the full moon, a special time to those that inhabited the village. Several dozen shinobi of the moon would be participating in the twenty by twenty amphitheater style arenas that littered the island, each competing and adding in the showing off of the pride of the village. Winners of the Midnight Champion night were allowed to use the champions training grounds at the peak of the island were the best supplies and masters lived. Not being aligned to a Dojo there you could stay and use the facilities for the next month until the next round of Midnight Champions matches occurred. This was a great and sacred honor to ninja of Gekkousato.

Each Participant would have a scroll of entry sealed onto their chest that would only unseal upon them losing or the night ending. The winner of the match would use the losers scroll and their own as a ticket to enter into the sacred training grounds for the next month. This meant that each fight went until your opponent was knocked out or the match was called due to life threatening damage or the like. Many of schools used this night monthly to show off their merit and hope for admittance to the sacred grounds if enough of their students succeeded as the village rewarded those that produced. At each arena dozens of people would sit in attendance to watch on and witness the future champions of the village.

Keiji had been chosen to participate on this night and would show up in the customary half gi of the Tsuyoiito when they had representatives. He was entered into the weapon arts section of the island and had shown up in his navy blue gi bottoms and nothing else but wrappings around his abdomen, feet and hands. His Mari-Blade poised in front of him its tip in the ground as he waited for his opponent to show. He wore his hair long on this night , roughly two meters in length as his ebony locks were in a high ponytail that reached the ground. His musculature was much like that of a swimmer in that he was well defined but not bulky signifying that though he may be strong he definitely prioritized speed over power.  The bandaging on his right arm seemed to loop into the ringed pommel of his weapon, tethering him to it.