Name: Boomclap
Specialty: Nintaijutsu
Rank: S-Rank
Element: Wind/Fire | Fuuton/Katon
Cost: 25 CP, 20 SP
Range: 20 Meter Cone
Duration: Instant
Description: This move fuels off of Sojiro's private jutsu known as the Thunderclap but trades its defensive capabilities for pure offensive destruction. Instead of summoning wind chakra in both hands, Sojiro only does so in one while instead summoning fire chakra into the other. He brings them together in a great meeting of force, a meeting of fire, wind, and force that would is them released in a large cone in front of the man. The fires from this jutsu burn brightly, burning through any defenses of A-Rank and lower, rendering them completely useless and burning whatever skin they were protecting beneath. Although, a water-based defensive jutsu of equal rank could protect someone against this move. This fires from this move rage so hot that they even metal all weapons and projectils that are A-Rank or lower, that are caught in the flames and melted. The fire can set anything it touches aflame, including buildings, surrounding greenery, or ect.

The force behind this devastating attack is so truly immense and frightful that is even leaves both of Sojiro's arms burned in the process, the damage down to them equal to an A-Rank wound each.

If this move is used before Sojiro heals his arms, then his arms cannot be used again for the rest of the topic.
Status: Private Jutsu.
Parent Jutsu: Clap, Thunderclap 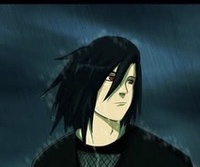