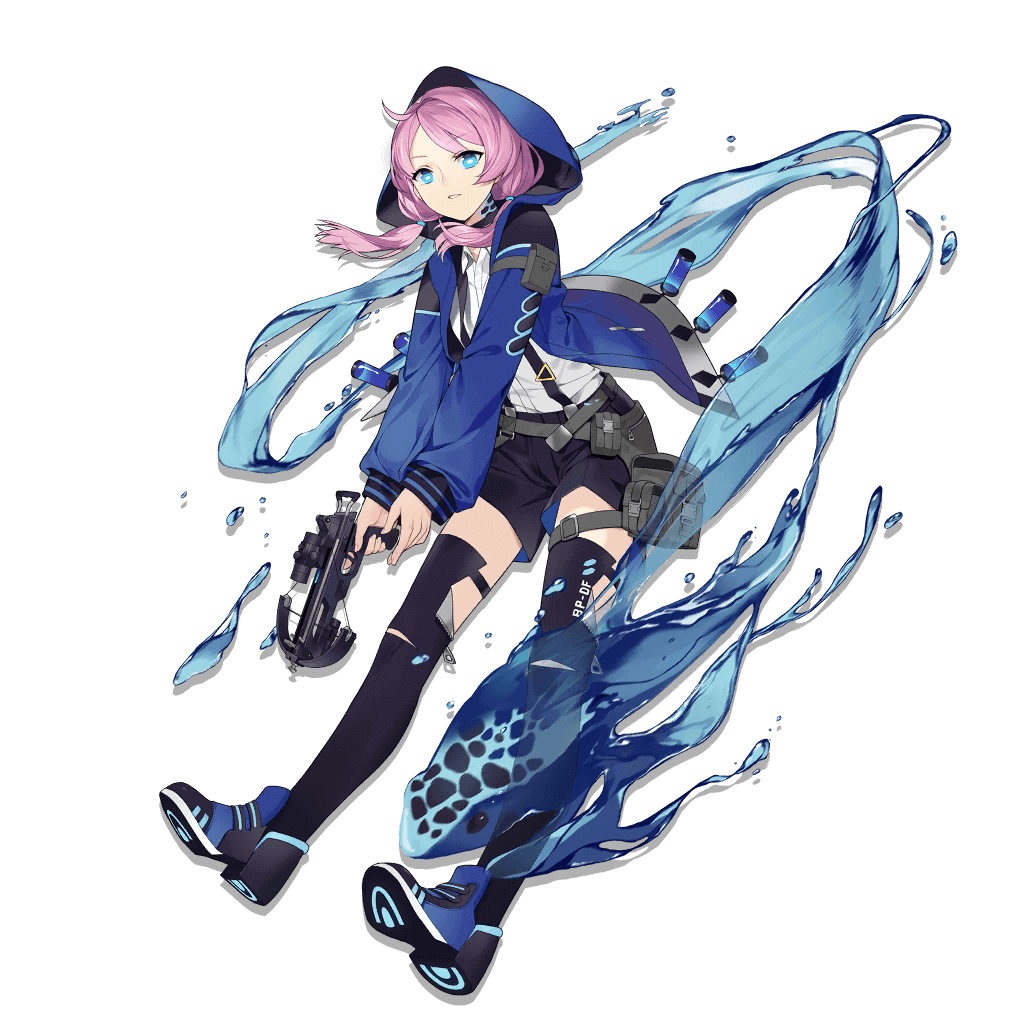 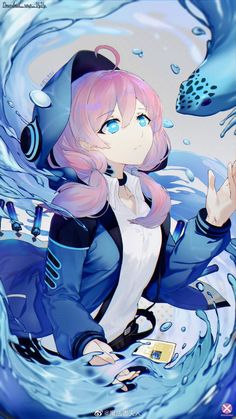 Rumi is a young teenage girl with natural pink hair that is most commonly wore in pigtails, light blue eyes, and pale skin. She most frequently wears a white button-up with dark blue suspenders-shorts and matching thigh-high socks, wearing atop this a blue and dark blue long-sleeved hoodie that is mostly worn open and sneakers to match.

Two unique traits that identify her as a member of the Dokukaeru Clan, outside of her natural pink hair, are her pupils that are white an in a shape similar to a hyphen and a small layer of skin that spreads from the sides to the back of her neck where the base layer is a light blue and the top layer is spotted and of a darker blue hue. This is hard to see not only because it is a small amount of skin that holds this appearance and being in a rather hidden area, but also due to the fact that Rumi wears her forehead protector around her neck when not in combat.

Rumi is considered a cheerful and lively girl by her clan, but they have a different standard for cheerful. Coming from a clan that focuses on self-balance and meditation, they often reach a point of enlightenment where they do not regularly show spectrums of emotion and thus Rumi's tender and quiet happiness that comes from doing menial tasks and helping others comes off as perky instead of a pleasant contentedness filled with humming and a gentle smile.

This doesn't extend to social interaction very much as Rumi has been used to isolation other than family and a couple of other clan members, so unlike some girls who will happily engage in conversation with people they haven't met before, Rumi will often stay silent when spoken to until something peaks her interest enough to get her to open up. Friends will notice a difference, though she is always soft spoken regardless of being shy or not.

Her clan's teaching are etched into her being and thus, when Rumi isn't on duty she spends as much free time as she can afford on meditation. This usually means isolation but if time requires she will also meditate in more public areas. Things like things and her clan's teachings can have people looking at her odd but this never phases her as she knows she must always strive for balance.

Rumi has a blind curiosity for things she doesn't know, which is a lot considering how removed her clan is from modern living, but her lack of knowledge can lead her into believing lies, phrases, wives tales and the lot very easily. It's up to her friends and allies to help her sort through what is true and what isn't.

In spite of her shinobi training, Rumi has a strong desire to protect other and does not desire to harm other more than necessary, something instilled into her through her clan's teachings. While she may use poisonous techniques to defend herself she will rarely use any that would perform any lasting damage, favoring those that cause paralysis or hallucinations to subdue her opponents. Her combat style focuses on a blend of both Medical and regular Ninjutsu as well as some Taijutsu and she performs duties similar to that of a tank or guardian: she focuses on providing defensive advantages to herself and allies while using crowd control to restrict her opponents and put her allies at an advantage, topping it all off with keeping her and her team in tip-top condition.

Dislikes:
- Spicy food
- Being too hot
- Seriously injuring others

Rumi's history is rather slow and bland in comparison to that of others. Her clan has avoided both internal and external conflict and has always done so for as long as she can remember, so she grew up with both of her parents and grandparents and never had many issues other than the occasional childhood squabble that would transpire before one understand such things are trivial via meditation and self-reflection.

However, there was a specific moment in which she defended some youngsters from a couple Scumps and allowed them to escape that always stuck with her, and from then on she always felt her personal balance revolved around helping and protecting others...though not many members often needed this type of protection as they are taught self-defense early in life.

Rumi would likely have never left her small village if it wasn't for her chance encounter with a man down on his luck. He had heard a wild rumor about frog people hidden in the trees past Lake Biwan who could solve anyone's problems, and his problem was money: he never had enough and always seemed to short on funds, and he was desperate for a solution. Rumi was the first of her kind he bumped into, and he pleaded with her for guidance. Rumi herself had no need for currency as she lived off the land, but her desire to help the man gave her the confidence to sit down and speak with the man.

After some discussion of his issues and his life, she helped him learn how to meditate as a way to calm his nerves and search deeper. Together, they came to the conclusion that this man had a lack of balance when it came to his stress and desires: Having no other way to relieve his stress, he would spend many on frivolous things to feel better, only to have more stress later when his funds were low. Rumi encouraged the man to find another outlet for his stress such as writing or meditation, but to not stop buying things for himself completely, merely lessen the extent at which he did. She also advised that perhaps he could find an occupation that was more to his interests and thus less mentally taxing and that he should perhaps try to stop smoking and drinking as she has heard that great amounts of money are spent on these unhealthy habits over time.

The man, not wholly convinced but willing to try, thanked her and left. Rumi would see him again nearly two years later, when her desire to explore the world outside her village was at it's peak. The man returned and, while not filthy rich, he was much better off than he had been. He had managed to quit drinking and was working on his smoking, and he told her that her advice on his career change and taking time to settle down and write out his issues had helped him discover the desire to become a semi-popular writer.

Rumi was very happy she had been able to help, but the man wanted to thank her monetarily, and Rumi had to refuse. The man was persistent however and offered to do anything for her, and that was when she asked if he could bring her wherever he was from. He agreed of course and, after consulting and informing her parents and a brief stop at a much more modern clothing store, she was brought through the gates of Gekkousato for the first time.

It wasn't long after that she learned about shinobi and she decided she would learn to become one to protect others and travel the world to spread her clan's teachings. She passed rather easily and became a Genin, but that is where her knowledge of the outside world would truly begin...