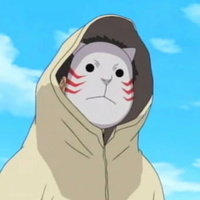 Spoiler:
Name: Patrol the Village
Rank: C-Rank
Participants: Moon Village, Sun Village
Type: Solo Mission
Reward: 20 EXP
Location: Within a village
Details: There is always something going on in the village. Low level criminals, basic thieves, or natural disasters like fires can pop up at any moment. Patrolling the village is the duty of all shinobi and you must make sure all is well within the village. Patrolling consists of walking the streets, watching over businesses, looking into rumors, and just keeping an over all eye on things.
Requirements: Your post must be at least 600 words.

White cloaked, white masked, Senkou stood at the entrance to his apartment building and did a mental check of his equipment and found it satisfactory. Today’s mission wasn’t about engagement with the criminal element, it was about ensuring the regular function of society. Show presence in the business sector, chit chat with the shop owners and customers, all parts of maintaining the trust in the system in place. Key stops would be Blinsky’s Gambling Hall in the Moonlight Plaza and the administration building in the Business District. Physical movement of large amounts of cash always signified some oddities happening and those would be the two biggest places to check on the comings and goings of people who would make deals with that as a requirement to do business.

Senkou rolled his shoulders, stretching his arms up and out and began his patrol. The day was bright with occasional clouds passing lazily through the blue sky. Hot too, the canopy of jungle foliage though occasionally trimmed back by public services still caused a sweltering heat with high moisture content. Didn’t take too long for Senkou to start sweating as he made his first stop at the Skyward Cafe for iced tea. The fans were going on full blast and provided a backdrop of white noise to Senkou’s observation of the patrons within. Typical spread of tourists and locals, maybe a touch more tourists at this time of the day, nothing unusual about the chatter either. Missing wallets, a promiscuous aunt, wife drinks too much, husband drinks too much, ‘we just don’t see each other any more’, etc, etc. The common banalities of life.

Moving on from the cafe, Senkou made a circuit around the plaza, making sure to check up on all the shops before arriving at Blinsky’s. The gambling hall was a cacophony of sound. Jammed pack with tourists yelling over the sounds of various games. Clinking, clanking, beeps, and buzzing. Tuning out the distractions, he began visually sweeping the area, taking measured steps through the crowds. Security guards in their respective areas, check. Big spenders still isolating themselves in the fancier portion with average amount of bodyguards and hanger ons, check. So far so good. No undue commotions, no odd spike in security, just an average day in the casino. Senkou made his way out, following the same measured pace he used to cover the floor.

The slight headache that had formed from being within Blinsky’s faded away as Senkou made his way out of the plaza and onto the quieter paths that led to the Administration Building within the Business District. The people that were on these same paths walked with quiet purpose to their intended destinations. Occasionally couriers would zip on by to deliver a package to one of the businesses. Senkou found himself in the lobby of the Administration Building, quietly sipping on a glass bottle of lemon iced tea. Mailmen, suits, other shinobi, and a gaggle of young staffers passed him by going about their daily routine. It was the exact sort of scenery that Senkou wanted to see. No groups huddled in corners conversing in hush voices. No strange lack of activity as if it was the calm before a storm. Normal was good.

Senkou got up and gave another stretch. A messenger came up to him and handed him a letter. A request for a mission from a Ami Hyuuga. Interesting, he didn’t know that one of the rising stars of the village had any professional interest in him. Perhaps a simple getting to know each other as comrades sort of thing. Would make sense, if she was looking to take on more authority in the future, she would need to get to know those who she would have to rely on. The messenger gave a slight bow and left Senkou pondering the topic in silence. He continued to ponder the topic as he made his way back to his apartment to gather the necessary equipment for this new objective and to write out his report of his patrol this afternoon. The late night patrol would want to take a look at it to compare to their observations. Now what exactly should be brought?