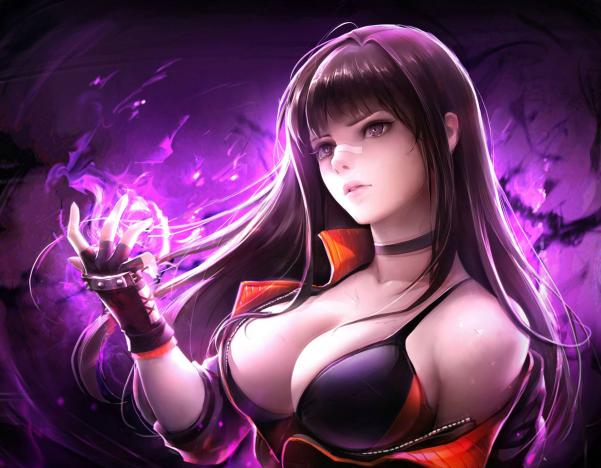 
Appearance:
Karite has silky smooth black hair that goes to about the middle of her back. She has hypnotic deep purple eyes with heavy black eye shadow and eye liner. She has an hourglass figure. She wears a black sleeveless shirt with a mesh long sleeve shirt underneath. She wears a black pair of shorts that allow her easy movement. She wears black shinobi sandals. She has a weapon pouch on her hip. She wears a black hooded cloak that covers all of her body. On the back of the cloak, there is a  rather big picture of two black wings surrounded by a red border. The wings meet in the center of her back and go out to her sleeves. If her arms are by her side, the wings look like they continue from her back onto her arms in one continuous motion and continue out of her arms invisibly. She alternates when to keep it closed or open. She wears a necklace of pentagram with an amethyst in the center of it. She also keeps her nails painted pitch black. Due to corruption from the goddess statue, her normal fire jutsu are purple instead of normal colors. She wears a pair of black gloves with a red circle of cerberus woven into the glove. See Bloodline application for circle of cerberus.

Karite is known as the angel of darkness with good reason. She is a dark brooding soul to those that do not know her. She is known to be willing to kill at a moment’s notice if it is what is needed for the job. She is quick and imaginative in her thoughts. She is decisive and knows what she needs to do. She has high self-confidence. This mostly stems from her decisions to protect the balance. She is independent and very introverted, keeping to herself most of the time. She is actually quite kind when someone gets to know her. She just keeps to herself to such a point that no one usually tries to get to know her. While she is depressed over this, she understands why this is. She is arrogant to a fault and knows what must be done and believes herself to be the end all decision. She has complete confidence in her arguments. She is judgmental, believing herself to always be right and that any who are inferior to her are wrong. She is overly analytical, allowing her to be successful in her decision making, but horribly failing in anything where logic doesn’t work, such as human relationships. She is driven by her desire to gain more knowledge. While she is very introverted, she will do what it takes to gain the knowledge that she requires. She loves animals and will pause to pet one. She is interested in learning more about the goddess she serves and the Shinigami who guides her path. She is willing to do what these two deities require of her. She is interested in what drives the balance and hopes to learn all she can about it. She is also interested in what makes humanity such a driving force in the balance. She knows that she will be an outcast because of her duty and she is okay with it. She is motivated to protect the ones she cares about. This includes her parents and her sister. She is motivated by the want to protect her village. She is also motivated by her goddess. She is said to be extremely devout towards her goddess and does anything that the goddess might wish. She is also devoted to the balance that her goddess wishes and will do anything to make sure that the balance is maintained. She knows that as long as the balance is maintained she will be happy and the world around her will be happy. She is dedicated to her mission.

History:
Kaname Akumu was known as a lazy alcoholic who would spend most of his time yelling at his wife. He was also the head of the Akumu Clan. The clan wished for him to be removed as the head but were unsure how to proceed. During this time, he had two daughters with his wife. He was supposedly abusive with his wife, though no one was able to prove it. Two years after his daughter Karite was born, he made a special dinner for his wife. After eating that dinner, Aiko supposedly had a heart attack. He had poisoned her, though no one could ever prove it.

Three years later, the clan got fed up with Kaname and his bull. As he left for a mission, the clan sent two assassins to follow him out. As he reached the furthest point from the village that the mission would take him, the two assassins killed him and disposed of the evidence. The two assassins came back to the village and reported to the clan what had happened. Because his daughters were still young and were showing good qualities, the clan decided to name that Hitomi would be the new head of the clan, once she became of age. The clan would treat the girls with respect and ensure they would be good leaders for the clan. Her sister was named head of the clan and has taken care of her sister ever since.

When she was about six years old, she wandered out of the village and found a deserted temple in the wilderness near the village. It was a temple built by the Akumu with a crypt beneath. An ancient burial site for the clans that lived in the area. She decided to enter the abandoned temple. She looked around, saying hello repeatedly. She finally heard someone call out to her. She grew concerned because the voice sounded hurt. She followed the voice to a room where there was a statue of what looked to be a powerful and gorgeous woman. The voice seemed to be emanating from the statue. She looked it over and was confused. She asked the voice if it was trapped. The voice said it was not. The voice began to explain that the world was in pain because the balance kept getting tipped over. The six year old Karite was confused and did not understand. She began to conversate with the statue. She talked to the statue for a good 24 hours until her sister came to find her. The two began talking about what had happened over the past 24 hours and it was decided that the statue would come home with them.

The statue was placed in its own room where Karite would come to commune with the statue every day. She began to grow darker and colder while still maintaining a friendly personality to those close to her. The priestesses of the clan taught her the secret techniques, with hope they would separate her from the supposed goddess. She pledged to become strong enough to fight against those that would corrupt the balance. Her classmates were relatively afraid of her and when she graduated from the academy, her teammates had a fear of her.

She went on a mission with her sister who was a chunin at that time. She was sent to retrieve something small with her sister, thus why it was only supposed to be the two of them. When they got to the spot, she noticed that a blood trail lead away from the area that they were supposed to meet with their ally. She followed the trail of blood with her sister until they were led to someone chopping up their ally. She heard a whisper that sounded like the goddess. It said to slaughter the person in front of her for going against the balance. She grabbed her sister’s sword and walked forward calmly, stabbing the man. She calmly killed the man as if it was normal. Her next words chilled her sister to the bone. “May your pathetic life serve the balance in death.” She grabbed what she was supposed to pick up from the ally and walked to her sister. She handed the sword back to her sister. After returning to the village, her sister has kept a close eye on her, out of concern for her safety.

You may now work on your character sheet and claim your starting gear.
Current date/time is Mon May 17, 2021 4:22 pm