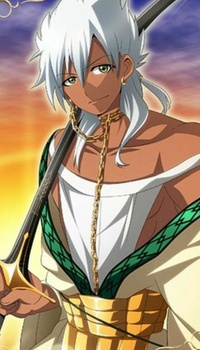 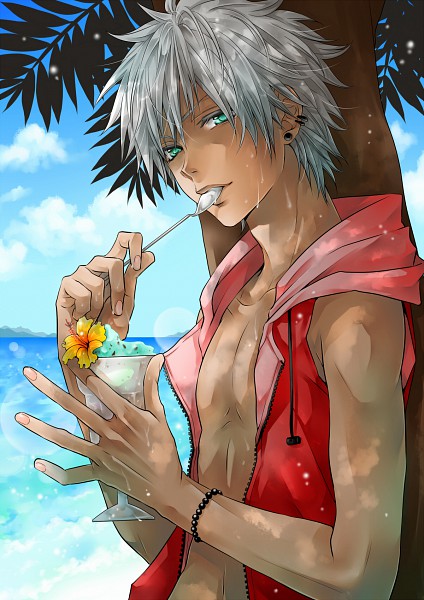 
Appearance:Shinigai has a darker complexion than most ninja, He has the initial white hair of his clan, Kaguya,  and slender body. His body has a slight muscle tone due to training to become a ninja. He has dreamy Light green eyes and tends to wear a Red unbuttoned Jacket with a hood. He has approximately six piercings, three in each ear. A medium sized Black earring and two looped earrings that sit a bit higher from the first one. He also wears a black bead bracelet that had been given to him by his father. He wears black pants which are a bit loose to allow for better movement. The end of his pants leg stops right before his ankle.

Personality:
Shinigai's attitude to people is cruel and distasteful, and sometimes Sarcastic. People make it seem as if Shinigai acts like he is better than anyone else but really he doesn't want to be connected to anyone else due to his life being a small wreak. Shinigai was not far from being mentally insane from the things he saw as a kid. By cutting off his emotions to the world and keeping a serious face. He has a great sense of humor which can sometimes be taken as being a smarty-pants. He is free like the wind and doesn't really take orders from someone unless he respects them which would take a great shinobi in order to do.

Shinigai is quite an arrogant, loud battle-hungry person. He can be quite impatient if he knows that there is fighting involved. Most of his free time, Shinigai trains just so that he can become an even stronger person than he already is. He personally does not mind having to do work though. It just seems like another opportunity for him to fight someone and show them his power. Despite those brutal actions that are performed by him, his most distinctive traits are:

Wrath/Split personality
Although the other sins don't govern over the body of Shinigai as much as Pride and Wrath, They do have a great influence when it comes down to the lust for Men and their sexual organs(Lust), His want for More power and the world all to himself(Envy and Greed), And his large appetite and his long resting periods(Gluttony and Sloth). But out of those 6 Wrath beats all, His want for the world to be obliterated in a fight to the death between citizens, Students, Genin, Chuunin, Anbu and the rest of the ninja ranks and the world out there. d. His pride and his wrath mix, Causing him to pause during each severing of a limb and Talk about his power and just why he calls himself the thunder god. Laughing during each second, much like a sadist.
Likes: List 3 of your characters likes
- Cute boys
- Awesome weapons
- the clouds
Dislikes: List 3 of your characters dislikes
- Boring People
- Spicy Food
- Birds (cause they can fly)

History:
Birth: Seventeen years before the start of this wonderful story a young boy was born to shuujo River and her Sperm donor Shinji Kaguya. The two had not been a couple they had simply agreed to mate to create a child who held both of their DNA. Gaining their intellect and battle power. After multiple hours of labor, the child had seen the light of the world. He was born. Given the name Shinigai and carrying the Farron and Kaguya name with him as he cried upon his arrival.

PreAcademy: years after his birth he began to walk and talk. Learning how to read from his mother and learning how to fight from his father. The boy would hit the age of 7 before he would start training with weaponry. His mother would become worried as she had different feelings for the young boy after his birth. No longer did she want him to be a mindless fighting machine she wanted the boy to live a life. During his nights away from his father, she began to tell him stories that would brighten his world and cause his smile to grow. Unlike the other shinobi, he had a darker tone and he knew that from the start. His mother had this same tone and would teach the young boy that his tone and power were to be feared for they could one day change the world for the good.

Academy: After he hit the age of 10 his father and mother collectively decided to enter the boy into the ninja academy. Both his mother and himself had moved into the large Kaguya mansion at this time. She was far from being a noble Kaguya but being the mother of the Prince of Kaguya she was shown a type of respect. The boy began to show early signs of cockiness and was not very amused by most of the villagers. Although at an early age he found himself intrigued by the same sex and sometimes the opposite. Two days before he would graduate from the academy at the age of 16 the young boy would begin to hear rumors about his parents. They were missing. Off on their mission, they promised to return for his graduation. Shrugging the other words off as hearsay he waited for his parents on that day only to be disappointed by their absence.