Mission Details:
Name: Wild Animal Attack
Rank: C-Rank
Participants: Moon Village, Sun Village, Missing Ninja
Type: Group Mission
Reward: 25 EXP, 10 Ryo
Details: A dangerous wild animal has been spotted out in the area, terrorizing travelers or local villagers. Your mission is to hunt this animal, and either get it to leave the area or take it down. If it remains in the region it could cause major damage or even hurt someone, so it is important to remove the beast as delicately as possible.
Requirements: Each person must make at least 2, 400 word post.

"Finally, a mission!" Sojiro exclaimed outwardly as he walked down the street and headed towards the village gates, having adopted his usual slouched stance as he did so. A grin rested on his features, supposedly some type of beast had been barging around the desert nearby and they needed people to handle it! He had made sure to prepare himself before leaving, dressed with his normal clothing on his body and various weapons in the pouch on his lower back. At the small of his waist rested a folded up Windmill Shuriken, the only weapon that he wore outwardly.

Sojiro was dressed within his most usual attire, which consisted of a black Flak Jacket that rested on his upper body and, on the back of the piece of clothing, was the famous symbol of the Sun Village. On his lower body was a pair of black pants that went about halfway down his calves, where they would normally meet a pair of shoes. Of course, for people that knew Sojiro, they would be aware that he almost never wore shoes because they could hinder his movement on the desert's sands. On his left arm was a brown leather gauntlet that contained a variety of different poisons, though they weren't seen openly. Sojiro had the vials and poisons hidden in a compartment on the underside of the gauntlets that he was wearing. Keeping back the man's raven-black hair was a red bandana, one that had a metal plate on it, making this article of clothing his shinobi headband. On the metal plate that was resting on the bandana was, as one person could most likely guess, was the symbol of the Sun Village.

Sojiro seemingly stood at five feet and ten inches tall, with sharp canines and nails(almost claws) to match. He had a very bestial appearance, the dark lines underneath his eyes accenting the sharpness of his eyes. The youth had been told that he was assigned a partner for this mission but, truth be told, he had stopped paying attention about the mission details after hearing that he was hunting a beast... "I mean, c'mon, what else do they expect from me?" His father had taught him the importance of paying attention, of course. But, sometimes, there was no hiding that bestial excitement that he was born with! And with that he'd round the corner and end up at the village gates; where he'd arrive to the meeting spot ten minutes late. 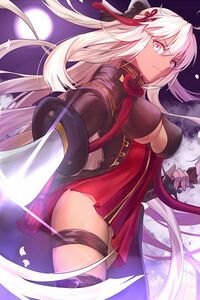 A wild beast lurked just outside of the village, just a few meters away from the village gates. It was no small animal or something that could easily be taken care of with just one person. Oho, that would've solved everything if only the situation was so simple. But no, it was something bigger than that. And it looked bigger than average, too. A white antelope. Its crooked horns ready to ram and stab and hooves that were ready to push forward. It wandered mindlessly around the sand, but it looked like it was contemplating when it should push forward, to cause mayhem and grant havoc in the Sun Village.

A job that would've been done a lot sooner if Yoriko's partner was around!

The young woman stood in front of the village gates with her arms crossed on her chest and gentle taps from her foot to maintain her patience. Her katana was sheathed behind her back with a small medic bag that carried other necessities to aid her and others. The moment she was informed of what was going on and assigned this mission, Yoriko did whatever she could to get to the area of problem as soon as possible. What were the odds of a wild animal that was bigger than usual just wandering aimlessly near the village? It wasn't something seen everyday, but it was bound to happen.

The only issue was that she was assigned a partner. Such a large creature could easily overpower a Genin. Not that Yoriko couldn't handle the beast herself. The issue also didn't rely on having a partner, but the partner she was specifically assigned with. She wasn't given much details about who she was working with, but she already figured out one thing about them: being punctual wasn't their strong suit. She couldn't handle it alone as much as she wanted to. She needed back up. She didn't want to risk the chance of screwing up this mission and taking all the blame for it.

It took ten minutes. Ten. Minutes. Her partner finally arrived before Yoriko was about to jump at the white antelope head on. She turned her head around to take a good look at her partner. She kept a stoic expression, but she was taken aback by his appearance. He physically looked capable, but that was just on looks alone. She could only hope he wouldn't slow her down, but as of now the only thing she could do is to trust her partner. After all, they were assigned for this mission together.

Yoriko sighed in minor annoyance as she turned her attention back to the beast. "If I didn't know any better, I would've went for the beast all by myself and wrestle it by the horns." She chuckled dryly.

"Anywho, the beast is a white antelope. It appears to be a lot bigger than usual, so this isn't a ordinary threat as it should be..." She trailed off momentarily to spare another glance at her partner. Maybe she could quickly use this as an opportunity to perhaps have her partner redeem himself from being so late. Already regret traveled all over, but who knew? Maybe he had a thing for the element of surprise. Right?

"That said, do you have any sort of plan on how we should... lure the animal away from the village?"
The author of this message was banned from the forum - See the message
Sojiro Sakura

As Sojiro had rounded the corner, he had doubted that he would have beaten his partner here, but from the look on her face... She had definitely been waiting for a while. The first thing he noticed about the woman wasn't anything about her attire or physical appearance but it was her scent. *Clean? Flowers? What is that?* Most Genin smelt of sweat or books from all the paperwork... His nose would twitch a few times as his brow raised, only then taking the time to look the woman over from her toes to her head. *Is this girl actually a Genin?* Sojiro pondered to himself before he would shake his head to dismiss the thoughts, returning to the words that were being spoken directly to him. *Shit, I probably should've been paying attention.* The man gave a nod of agreement, as though he had been listening the whole time as he actually tuned in,"...ordinary threat..." And from there on the youth was paying full attention to the girl as she spoke.

The man would raise his right hand to scratch his black hair a bit,"A plan to lure it away? Not exactly, I was just going to hunt it." He spoke very bluntly and direct, not quite condescending but in a tone that suggested 'What else would we do?'. And then Sojiro would remember his father and grunt a bit, taking a few steps before offering his hand to the woman,"Right, Sojiro Sakura." Was the rough way he introduced himself before he would turn his attention towards the gates, moving towards them so they could begin to head into the desert,"I don't have any jutsu, but I'm handy enough with my fists and weapons." He wasn't afraid to admit that to the woman, he was more than confident to fall back onto his physical strength.

Of course, as they exited out onto the desert floor, the woman would notice Sojiro kick off his sandals and place them into his bag. The sand was burning hot to most people but he let out a content sigh, digging his feet into it before being ready to pursue their target. As he placed his shoes away, he would draw out a leather gauntlet that he would slip onto his left arm, checking the underside where there seemed to be a small compartment for vials of some sort. He seemed to be pleased with what he saw since he nodded his head afterwards, closing it and giving the girl a thumbs up.
Sponsored content