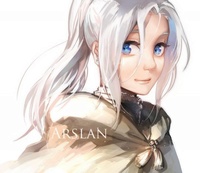 
Appearance:
Arslan has long snow-white hair tied in a ponytail that contrasts with his tanned skin. His eyes are light-blue and he has a small nose and ears. He has no scars. Arslan usually wears simple and practical clothing adjusted to high temperatures as well as picking clothes that generally don't infirm with combat proficiency. Arslan has a preference for blue-coloured clothing, typically things such as scarves and hoodies to deal with sand and the scorching sun. He typically wears his kunai holder on his right leg and the shuriken pouch on his lower back. Arslan keeps his style "elegant and simple."

Personality:
Arslan is a person that does not like to be reminded of the past. He constantly thinks about the present and the best way to improve himself as a ninja. It is not out of love or patriotism, but out of simple desire to be secure and to insure a quick promotion through the ranks. He is a very ambitious person. Arslan does not like to be reminded of his height, especially by those beneath him. In a battle anything works for him, and things such as honour do not concern him. He has hard time connecting to those around him when their opinions significantly differ, and thinks of humans as foolish creatures. He dislikes putting his life on the line for people he does not care about, and he finds meaning in power which determines human value.

Likes:
- Feeling in control
- Being most valuable that he can get
- Leaving a good first impression

Dislikes:
- Not being in control
- Being reminded of his height
- Authoritarian or Anarchist governments


History:
"Remember, Arslan, when you deal with strangers, you must leave a good first impression. It's important for business and most importantly, for making friends."
It was the lesson my father drilled into my head every single time a customer of his left him, yet it seemed to me that in practice he wasn't so good at it. He used to stutter in front of customers and was far too forceful in selling his shoes. Granted he had to earn money for bread. I remember sitting in my ragged clothes on a stool off to the side, an old piece of bread in my mouth and seeing my father fumble in front of his customers with those dirty shoes of his. He had a habit of biting his nails whenever the sale didn't go well.
A couple years afterwards my father noticed I wasn't growing as fast as I should. When he went to the local doctor he begged them to check me and it seemed that due to my bad diet I was falling behind other boys. He thanked them and we went home. As time passed by my height ended up being a source of bullying by other boys, the type to act "cool" in front of girls and to cower in fear when their mothers arrived. Idiots.
I was lucky enough to receive education, courtesy of my father, in reading, writing and basic math. "When one lives in a village in the desert, one needs only the basic of education." Then came the process of teaching me how to make shoes. It was the most miserable part of my life. Take one thing you hate doing most and imagine doing it all day and night. It was excruciating, but I am a naturally patient person.
When I was ten a merchant caravan was passing through our village and due to an incoming sand storm decided that they were going to spend the night in the village. Come morning my curiosity got the best of me and I ventured outside to see what the people were like. And so had a "fated meeting" if such a thing as fate exists (it doesn't).
"Oh, my bad little girl. Here, let me lend you a hand."
A giant man, easily 2 meters in height, offered me his hand. As I was turning the corner I bumped into him and fell on my butt. I glared up at him, but he just smiled, teeth all pearly white. My hand was like a grain of sand in his.
"I'm Arlsan, and I'm not a girl!"
"You look like a girl to me."
He was teasing me and I was not yet experienced in formulating the best responses in different situations. A lack of experience that I would correct in the following six years.
"Do not! Effeminate looks don't make me a girl."
"Your vocabulary sure is advanced for a five year old. Hehe."
"I'm ten. Just because I'm short doesn't mean I'm five!"
He guffawed and I felt my neck growing stiff from looking at (almost) 90 degrees. Just at that moment my stomach grumbled and he cocked his eyebrow at me. I felt my face heat up.
"Hungry, eh? Me too. Come on, let's go get something to eat. I saw a ramen stand over there."

"You're a ninja?" I asked, having finished my portion. He sipped at his drink and nodded.
"What's a ninja?"
He looked at me as if I spoke an unknown language.
"You seriously don't know?"
I shook my head no.
"Well, they're basically soldiers that fight to protect their country and citizens. It's a nice job I think."
"Why would you want to sacrifice your life for others if they won't do that for you?"
"Because it's the right thing to do."
I didn't understand. Our village was, and still is, fairly removed from society, and it would be quite a shock to understand what real life was like. Nothing like in the idealistic fairy tales, but not a cynical hopeless place either. If you knew how to be the most valuable version of yourself that you could be.
"Doesn't seem worth it, Mister."
I blinked up and looked at him the way I knew adults liked to be looked at. Respect, a little adoration and curious. I don't think I was ever much successful with him.
"Well for one it pays a lot. You can be set for life after some A-ranks for example. Depending on how you live for example."
If physically possible my eyes would have transformed into giant coins.
"Oh, Arslan, thank the gods in heavens!"
And there came my father, sweeping me in his arms on the verge of tears. I said what I knew he wanted to hear. It's not like I was that far away. In the end we had to leave soon, but what that ninja said would instill the first actual fight with my father.

For three years I grappled with my father whether I should or shouldn't be a shinobi. His arguments while sound always managed to spark a flame of anger. I was a meter tall he said and ninja work is extremely dangerous. They wouldn't let me in due to my physical deficiency.
And whose fault is that, I would always ask myself. In the end I won out. Our first moving was quite difficult for my father. For some reason he was sad to leave that shit hole of a village. I couldn't have been happier.
In the ninja "village" it was very difficult to find housing, but since there were more customers in the district where we (somehow) found a one-room apartment job was going well. As well as it could.
The day we tried to get me signed up in the academy had to be the most stressful. The ninja that was interviewing us was old, and (by my estimation) half-senile.
"How old did you say he is, Mr. Kaan?"
I felt my eyebrow twitch. Just try and say it, bastard I thought.
"Ten, sir. You can see it in those, uhh, documents."
The "sir" looked them over carefully and sighed. He lowered them down on the table and cleared his throat.
"Look, Mr. Kaan. We accept children from all walks of life. I've seen it all, but, Mr. Kaan. The boy can't enroll here. He's too short for one and I fear that he might not be able to handle the physical curriculum, sir. It's very demanding on children."
My dad started to fumble and I knew I had to take it in my own hands if I was going to pass. First I sniffed. The ninja across from us stopped (as did my father) and looked at. I channeled all the emotion that I could. It had to be one of my most impressive successes up to that.
"I-it's ok, dad. I g-get it."
Crocodile tears rolled down my cheeks and the ninja looked uncomfortable. Bingo.
"Look, son, it's not th-"
"No, it's ok, Mister, I understand. You don't want me."
"No, no, it's no-"
I cried harder. It helped that I could channel genuine frustration with my life till that point.
"I really wanted to join, y'know? After I saw how brave and heroic those ninjas in my village were I only wanted to be like them. But, I g-guess it's impossible."
The ninja swallowed and looked away.
"L-let's go dad."
"Wait."
I internally smiled.
"Look, son, please stop crying. I'm.. I'm regretting doing this even now. Look, I'm going to give you a trial period, ok? One year. If I see that you aren't coping as well as I'd like you to I'm going to have to say no, ok?"
Checkmate.
The following three were the most studious of my life. The curriculum was demanding, and I sometimes didn't get a wink of sleep. In the end it was worth it. After three gruesome years I managed to pass. An unfortunate side effect was that due to demanding training I'd never grow taller than 1.3m at most. But if height was what it would take for me to never live like a street rat then I'm all for it.
And such began my journey to rear-echelon deployment.

Face Claim: Arslan from Arslan Senki
Owner: Luci
The author of this message was banned from the forum - See the message
Sojiro Sakura