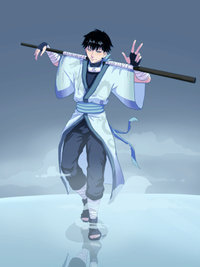 Ryojin is a pale boy with dark black hair and ocean blue eyes. He is well toned. He often wears light dark blue under clothing, including his pants, shoes, and gloves that are fingerless. He wraps his shins and fore arms in bandages. His hair is short and messy. His eyes carry with them a sense of childlike innocence and genuine curiosity. He is not too far above average height and he is well defined, but not extremely muscular. He smiles often and smirks even more often. He is the type that people could often flock to if they wanted to have fun or feel an air of freedom that often isn't given life by others. He wears a headband that matches his standard jacket around his neck. On his two tone jacket is a darker outline of a striking dragon. His coat is often tied to him with a more neutral blue piece of fabric.

Ryojin is a naturally born extrovert. He can and will hold a conversation with anyone and everyone possible. He has a boundless curiosity and yearn for knowledge. All of knowledge. Even the most personal knowledge about people they wouldn't normally share. As a result it is very clear that Ryojin likes to be all up in people's business. He can talk for hours and hours even about nothing. He is a welcoming person who often gets too excited over the little things. Though he can be nosy and overly rambunctious, he is trustworthy.

Once someone gets closer to Ryojin, they would come to see that he is reliable to a fault. He is always willing to help others even if it's beyond his reach. This often comes to a fault of him making things worse, or just not actually being able to help. He is very easy going in most situations to the point where sometimes he would rather leave hard decision making purely to chance.

Enemies come to see that maybe he refuses to view them as enemies at all. He is perhaps just as kind to someone who would stab him in the back over and over and that is his greatest fault. He gives and gives with no idea when it's okay to take for himself.

Ryojin was born in a dying outer village. He was the youngest of five siblings. Their mother began to grow ill quite frequently after giving birth to Ryojin and his siblings and father held it against him. He grew up treated like garbage by the very people who were supposed to make him feel at home. He kept himself secluded from them as much as he could, but more often than not this didn't do anything but make his problems worse. He would often be pushed around and ignored if he asked for help with his chores and though they didn't starve him, he didn't even get fed as well as the other siblings. His mother, by the time he was eight, was too sick to even be able to speak. His family began referring to him as "mother killer". He tried to withstand it. While his mother was well she always said treat others as you want to be treated. She would talk him down. She would be there for him even despite the others persistently harassing him. She promised once she got better she would take him elsewhere. Once he turned ten, his mother died.

He was abandoned by his own family. He would push himself to smile and forgive them maybe so much so that something inside him died. He couldn't even find the will to hate them and he never would understand why. He did know that he needed to leave. He waited until night fall one evening and ran. He ran until his body was so tired it shouldn't have moved anymore. Just a moments rest. That was all he needed. He sat down and when his eyes opened he found himself in a hospital bed.

At first he was terrified he had ended up home, but people in this place weren't people he recognized. "Just a moment and you'll be able to speak again. Your healing has gone well. You were in bad shape when we found you." He made eye contact with the medical shinobi speaking to him and simply nodded. "Do you have a home boy?" Maybe it was just enough to push him over some edge, but he finally let it go. His pain, his grief, his buried anger at himself and at his family. The moment passed and he simply responded, "No.. I.." The man held up a hand as if to signal it was okay. Ryojin didn't even realize it, but at some point tears had started streaming down his face.

Ryojin promised himself he would do his best to make sure nobody ever felt like he had before. He would take the kindness he was given and push it forward. There was still plenty of room to grow, but his ambition had already begun carving out who he wanted to be.

Character application approved. You can now start on your character profile and claim your starting package.
Current date/time is Thu Jun 24, 2021 6:33 pm